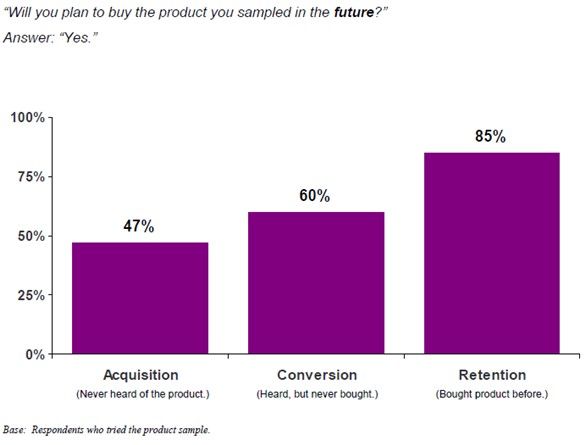 Product sampling reaches 70 million consumers every quarter, and
one-third of customers who try a sample will buy the sampled product in
the same shopping trip, according to the “Product Sampling Study” by Arbitron and Edison Media Research, reports MediaBuyerPlanner.

According to Arbitron, sampling also drives huge gains in brand awareness
and loyalty. In fact, 58% of those
surveyed report that they would buy the product again.

Consumers were grouped into three categories:

Fully 85% of the Retentions and 60% of the Conversions said they
would in the future purchase the sampled product; samples encouraged
nearly half (47%) of the Acquisitions to purchase the product in the
future.

“This is exciting news for marketers and advertisers who are looking
for alternative ways to make an immediate as well as long-reaching
impact on consumers with a high return-on-investment,” said Carol
Edwards, SVP of sales, Out-of-Home Media for Arbitron.

“This study enforced that the sampling approach is both effective in
making new customers aware of products, while also establishing a
firmer identity with those consumers who have considered the product
before.”

The study also found as follows:

About the study:
Arbitron and Edison Media Research conducted a national telephone
survey from January 18 to February 15, 2008. 1,857 respondents, ages 12
and older, were selected at random from Arbitron’s 2007 fall
diarykeepers. In geographic areas where Arbitron diarykeepers were not
available (representing 8% of the population), a supplemental sample
was interviewed through random selection.