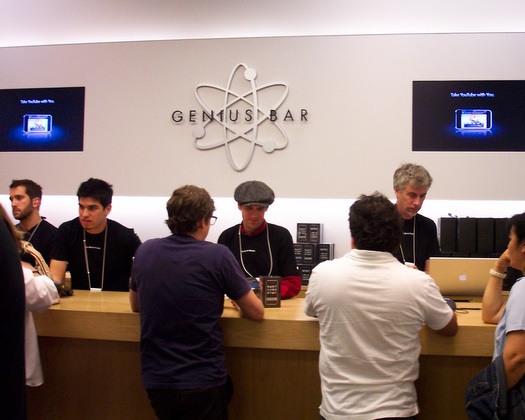 About 10 years ago, I worked in the wireless field. While the phones we sold in those days were not as complex as they are today, they were still complicated for the times.

Stores that took the time to help customers understand how to set up voice mail, speed dial, voice dial etc., and fix issues certainly had more customer loyalty and sales than those that did not.

And, I was always amazed that there wasn't more focus placed on workshops and one on one training because it worked by building trust and customer satisfaction because you could enjoy everything your phone offered.

Today, I'm amazed by how many retailers simply don't get it right. One that does is Apple.

I finally became a happy Apple man two years ago with my first purchase of my amazing 17" Mac Book Pro (I am typing this post on a brand spanking new 15" MacBook Pro) and I cannot see me buying any other computer brand because of the Apple's service and their amazing geniuses. Apple's user experience is simply superior than any other I've experienced in the computer industry and ranks pretty darn high for any other retail experience of mine too!

Apple continues to differentiate itself by providing
innovative products, evolving and improving and not following the crowd. However, walk into any Apple Store, prop yourself on a stool at the Genius Bar, meet a true Apple Genius and you'll never go back to another computer brand either – I'd bet on it.

Apple's brand story is all about value to me.  Sure it cost me more immediately out of pocket to buy my MacBook Pro, but the service, product value and more sets it so far apart from my near death experiences with Dell that I can't see me ever going back.

Apple has now been in the retail store sector for a little over seven years has totally left its naysayers in the dust (see BusinessWeek story, "Sorry, Steve, Here's Why Apple Stores Won't Work."). Currently, Apple has over 200 stores in the US, UK, Japan and Canada with plans for many more.

I'm no genius, but It doesn't take one to figure out that this is a textbook
example of how to do things right. Apple's retail success spoke for
itself when its stores reached $1 billion in annual sales faster than
any retailer in history. That was in 2004. In 2006? Sales reached $1 billion a quarter. Wow!

Service during and after the sale never goes out of style and reaps mutual dividends fro both the brand and the customer long after the cash regsiter rings.