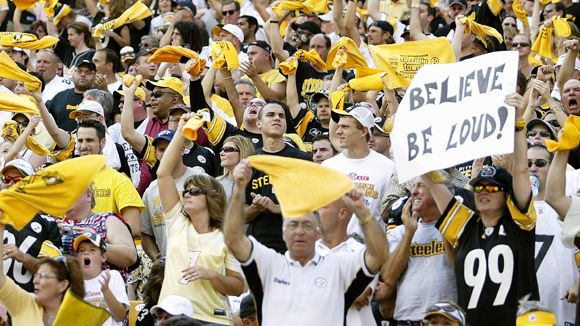 And, Sports Illustrated's Ross Tucker believes what he sees
too!

Yes – I'm a rabid Steelers fan and we are the best!

Do your fans travel with you across the country, wave things, applaud and cheer till they're hoarse and try to convert others? If not, why not?

When the steel industry finally collapsed in the 1970s, it coincided with the
rise of the Steelers dynasty and the team helped lift people's spirits – believe me I was there and am still here bleeding black and gold!

A generation of young people left the city to find work elsewhere, but
they remained passionate about the Steelers and that's what you'll see in Tampa today at the Super Bowl. The Arizona Cardinals may be the designated home team, but with thousands of Steelers fans waving their Terrible Towels, it will be like playing in Heinz Field back in Pittsburgh.

Here's my take on why the Steelers are one of the strongest brands around.

Win or lose today, the Steelers will still be the number one sports team in Pittsburgher's hearts.  And, next season will be a sold out one at Heinz Field.

Check out this video about the how the Steelers rank third in fan loyalty!