How to Improve Call Center Service

How to Improve Call Center Service 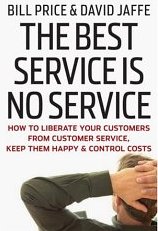 If your brand runs a call center (and even if you don't), don't think for a second that you can't make it  a tremendous competitive advantage due to how poorly so many are call centers are operated and how poorly phone calls are handled.

Dimension Data surveyed 300 call centers in 36 countries across five
continents from 1997 – 2007 and here are a few key disappointments:

The report also states that contact centers are finding it increasingly
difficult to retain employees. During the 10- year period, annual agent
attrition rate rose by nearly 93%, increasing from 14% to 27%.

Some of the difficulty in retaining employees could be related
to the increased outsourcing of agent seats. The survey found a 220% increase in outsourcing, with 16% of agent seats outsourced in 2007
compared to 5% in 1997.

So what's the deal?

Here are a couple of reasons for poor call center performance:

An excellent book on this subject is, "The Best Service is No Service." And, here is a brief interview by Guy Kawasaki and the book's author.

In short, here's The Best Service Is No Service seven principles to deliver the best service that ultimately leads to “no service”:

To the list I'd add – make a great product or deliver a great service in the first place!