I try to stay apolitical in this Blog, but WOW…how can a marketer not comment on this landmark Presidential campaign? What a unique game-changing marketing performance and case study! What a two-year marketing ride choosing between Brand McCain and Brand Obama.  No matter if your guy won or lost, you can learn a great deal about marketing by scrutinizing why Brand Obama was the brand more Americans preferred.

The main reason why Obama won was that he/his brand was uniquely different!! 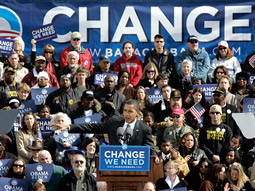 1.    Brand Obama stayed on the singular message of CHANGE!
2.    Brand Obama was a better storyteller. His oratory skills were spectacular and his messaging was focused and clear. His classic speech on race…WOW, it doesn’t get any better than that.
3.    Brand Obama’s internet marketing strategy was superior. Viral media, engaging media all excellent.
4.    Brand Obama built a bigger permission based database which led to record donations.
5.    Brand Obama reached beyond its base to be inclusive and nice to others to convert
6.    Brand Obama was clear and calm. Any leader can row a boat when its calm, but can they do it when the water is rough? Obama showed a calm demeanor through the entire campaign and people were looking for calm, cool leadership and not the cowboy arrogance of Bush.
7.    Brand Obama executed better – flawlessly. He never seemed to make a mistake.
8.    Brand Obama worked to pump up the pumped up. He reached out to other groups unlike his base, but they were interested in change.
9.    Brand Obama attacked actions not the person. People respect those who do not attack ther person, but rather his/her actions.
10.    Brand Obama satisfied customer’s main need to fix the economy. In mid September when the race was getting a little tight and the banks started to collapse, McCain said, “The fundamentals of the economy are strong!” Well, Obama’s team jumped on the statement which showed he was a bit out of touch not recognizing the famous line of the Clinton campaign, “It’s the economy stupid!”

Here’s a good New York Times story that adds a bit more texture to my argument…Hail to the new Chief! “Yes we can” learn terrific marketing lessons from this campaign. God bless America.