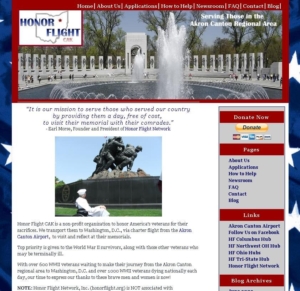 Since 2005, the Honor Flight Network (http://www.honorflight.org) has had one simple goal in mind, to safely transport America’s veterans for free to Washington, D.C. to visit those memorials dedicated to honor their service and sacrifices. Priority is given to World War II veterans – who are dying at a rate of 1,000 every day – and then Korean and Vietnam War veterans and so on. HFN presently has 71 hubs in 30 states and by the end of the 2009 flying season in November, it will have transported more than 42,000 veterans of World War II, Korea and Vietnam to see the memorials built to honor their suffering and sacrifice to keep this great nation free and a world leader.